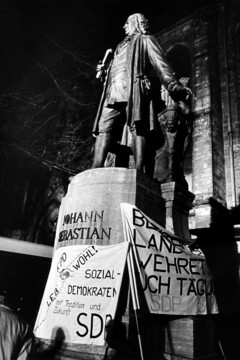 The decisive event of the Peaceful Revolution was the huge Monday Demonstration in Leipzig on 9 October 1989. Seventy thousand demonstrators overcame their fears and faced the armed security forces chanting “We are the people”. The peaceful revolution could no longer be held back. With their courage the people of Leipzig made a major contribution to the fall of the GDR regime.

People in many large cities and small towns demonstrated against the regime but perhaps more than any other place, in the minds of people in and beyond Germany, Leipzig was the model for the Peaceful Revolution. 9 October 1989 became the day of decision for the future of the democratic movement.
Leipzig's Church of St Nicholas formed the centre of the growing movement. Ever since 1982 people had been praying here for peace and human rights. From the autumn of 1988 onwards more and more people gathered every Monday in the courtyard of the church. On 25 September 1989 they made their way for the first time to Augustusplatz square and and the Promenaden ring road. They proved to be a model for many other towns and cities in the country. Thanks to the courageous, non-violent impact of the Monday Demonstrations , the 9 October 1989 became one of the most significant days in recent German history.

As a result, the 9 October is not just an important historical date for the City of Leipzig. To the present day the city feels it is obliged to dedicate itself to democracy, non-violent protest and freedom of speech.

Leipzig's Monument to Freedom and Unity will represent all people in the GDR and their civil courage, ability to overcome fear and determined spirit of non-violence and is a "gift" to all who wish to remember those autumn days or get to know them better. The citizens of Leipzig made the Peaceful Revolution come true.