In 1990 Leipzig had 70 kilometres of cycle paths, in 2003 there were already 200 kilometres and today its more than 400 kilometers. Cycling is generally permitted on all paths in the Auenwald floodplain forest, in green spaces and in the parks of the city. This is a considerable extension of the existing network of paths available for cycling.

In 1998, the percentage of distances covered by cyclists in the city was 14 % of the total distances, i.e. cycling is quite popular with the citizens of Leipzig and the guests of the city. Compared to 1989, the bicycle traffic has doubled. And its still growing - In the year 2010 - 16% of the people living in Leipzig used the bycicle for their trip to work. Two years later there were already 23 %.

As a consequence, cycle path maintenance and construction is an important issue for the city council. Last years construction and maintenance measures included large parts of the trans-regional cycle path by the river Elster, cycle paths along the northern periphery and along Marschnerstrasse.

As the umbrella organisation of all sports cyclists in Germany, the Bund Deutscher Radfahrer (Federation of German Cyclists) was founded in Leipzig in 1884.

Racing cyclists use special Internet forums in order to arrange races among themselves, but specialist cycling equipment retailers also often function as contact points for other dedicated cyclists wishing to ride in groups. Individual cyclists looking for information about suitable cycle routes in the region are advised to use specialist maps which provide additional information such as traffic density or the surface characteristics of individual roads.

Within the City of Leipzig and its surroundings there are a number of hills worth climbing (the Großzschocher, Leutzsch and Grünau former pit heaps; Fockeberg). However, there are also attractive flat routes for mountain bike trips, especially in the Auenwald area and on the perimeter of the city.

BMX - kids and teens who are interested will find a good place to practise at the Heizhaus and on the concrete mounds in the neighbouring BMX and Skate Park Leipzig-Grünau (at the end of the Parkallee). Since 2013 the Heizhaus has also offered a pump track made of earth and clay, sponsored by the "Spielraum" (space for play) programme of the Deutsche Kinder- und Jugendstiftung (German Foundation for Children and Young People) and other partners. 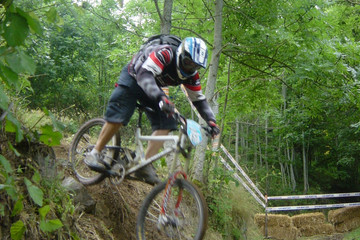 In Leipzig-Lützschena the Ride - LE e. V. club has its own dirtbike facility, featuring high-speed downhill runs and spectacular leaps.