On this page, you will find information on the following topics:

Twice every year, leading representatives of the Protestant, Roman Catholic and Russian Orthodox Churches, the Jewish, Muslim and Vietnamese Buddhist communities and the Bahá'í meet at the Leipzig Interreligious Round Table.

Representatives of other religious communities also often attend as guests.

The City Integration Officer acts as a co-ordinator and moderator at the Round Table and his services are gladly welcomed by the participants.

When exercising their right of freedom of religion guaranteed by the German constitution, religious communities confront local authorities nationwide with issues which do not always fit into the traditional patterns of processing and decision-making.

These new challenges have an impact on an increasing number of administrative areas – from building regulations and veterinary supervision service through cemetery and swimming pool codes to youth aid, health support and assistance for the elderly.

Interreligious ceremony at the opening of the 2014 Leipzig Intercultural Weeks 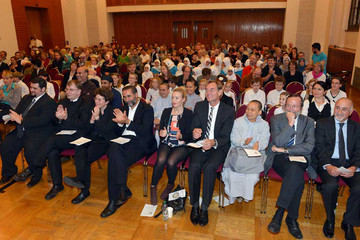 After the positive experience of the previous year, the Intercultural Weeks were opened by Mayor Burkhard Jung at an interreligious ceremony at 3 p.m. on Sunday, 21 September 2014 in the ballroom of the New City Hall.

Afterwards, a number of Leipzig religious communities introduced themselves with cultural and spiritual presentations prepared especially for this occasion.

The Intercultural Council in Germany

People of different origin and nationality and from different social groups, such as trades union, employers’ associations, religious communities, migrants’ and human rights organisations, local authorities and government agencies, media, science and sport, have worked together on the Intercultural Council since it was formed in 1994.

Targets of the Intercultural Council

The Intercultural Council instigates and co-ordinates the International Weeks against Racism nationwide and publishes numerous documents relating, for example, to living with Muslims or to interreligious dialogue, and makes statements on current developments or planned legislation concerned with migration and integration.

Interreligious Conference in Graz: ComUnitySpirit. Dialogue of Religions and Cultures

Taking the motto of "ComUnitySpirit", the "ComUnitySpirit Interreligious Conference” was held in Graz in Austria in July 2013, where thoughts on the peaceful co-existence of people of different religious faiths were discussed and recorded. On this basis, specific suggestions for action for towns, cities and religious communities were drafted.

The outcome of the Conference is

This is a future-oriented document for mutual understanding, recognition, tolerance, reconciliation and co-operation between religions and cultures in Graz and Europe.

The German Islam Conference (DIK) was set up for a long-term dialogue between the government (federal, state, local) and Muslims.

The aim is recognition of the existing contribution of Muslims and Islamic organisations to religious, cultural and social life in Germany.

At the same time, the German Islam Conference has the target of developing relations between government and Islamic organisations in a spirit of partnership.

To achieve this, the German Islam Conference plans to focus in the future on topics relating to the participation of Muslims and their organisations in society and under religious law.

The Young Islam Conference (JIK) is a forum for dialogue and a multiplier network for young people between 17 and 25 years of age. It is a project of the Mercator Foundation and the Humboldt University in Berlin.

The Young Islam Conference is a nationwide forum offering to religious and non-religious young people with or without an immigrant background a platform for acquisition of knowledge, exchange of ideas and intervention in social debates on the role of Islam in Germany.