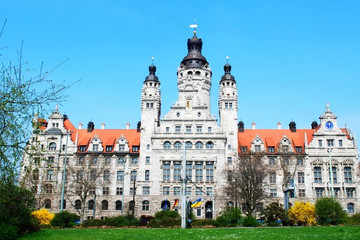 The New Town Hall, seat of Leipzig's municipal government since 1905, ranks as one of the most important municipal halls in all of Germany. Constructed in historicist style, the monumental structure is characterised by its artistic interior design and its opulently ornamental façade.

Getting to the New Town Hall and Town House

Tram Lines 10 and 11 to Wilhelm-Leuschner-Platz

Handicapped parking places are available at the main entrance to the New City Hall on Burgplatz as well as in Lotterstraße.

The tower of the New Town Hall was built on the foundation of the tower of the old Pleißenburg castle. At exactly 114.7 meters (376.3 feet) high, the tower rises imposingly over the city. It is the tallest city hall tower in Germany and one of Leipzig's most important landmarks.

Tower tours take place Monday through Friday, allowing visitors to climb the 250 steps from the building's fifth floor to the highest tower level, which offers an impressive view of the city.

Tours depart from the lower foyer of the New City Hall, Martin-Luther-Ring 4-6.

Children, students and holders of a "Leipzig Passport": € 1.50

The Town House was erected several years after the New City Hall, and the two buildings are connected by a bridge. Since 1912, the Town Hall has served as an additional seat of municipal offices.

Map of the City

Location of the New City Hall on the map of Leipzig

Information regarding hours, addresses, telephone numbers and contact persons for the Leipzig municipal government, along with information about non-municipal services and building tours is available at the information centre in the lower lobby of the New City Hall. A variety of other free information is also available.