Official ceremony to commemorate the twentieth anniversary of the Peaceful Revolution 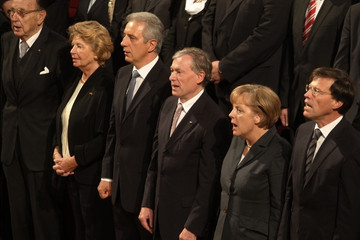 The ceremony was the principal event of a range of celebrations to commemorate the twentieth anniversary of the Peaceful Revolution in Saxony. Speakers included German President Horst Köhler, Saxony's Governor Stanislaw Tillich, Matthias Rößler, President of Saxony's State Parliament and Mayor of Leipzig Burkhard Jung.

In addition to prominent members of the public, people who witnessed the events of the time, civil rights activists and the representatives of democratic initiatives took part in the official celebrations, which were broadcast on radio and TV.