Those seeking an active holiday in Leipzig will be delighted at the scope of recreational activities possible. About one third of the city's territory is made up of green spaces, woodlands, parks, small gardens and allotments, and sports and recreation grounds. For nature-lovers, Leipzig, though located in an area otherwise lacking in woods, has a special treat in store. The Auenwald floodplain forest stretching in a wide band from north to south right through the city is a unique biotope accessible on foot, by bicycle or (in parts) on horseback. Guided tours are available, showing the special flora and fauna of this woodland area criss-crossed by several water channels and feeding Auensee lake. Near this woodland area, there are a number of riding stables open to beginners and experienced riders 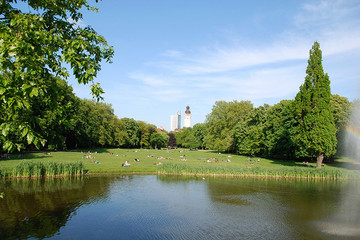 Leipzig boasts large green recreation zones only a few minutes from the historic city centre, including the Clara Zetkin Park and the Rosental park. In summer, their ponds, fountains, lawns, playgrounds, open-air cafes and beer gardens, and an open-air stage invite many different kinds of leisure activities. Leipzig's oldest sports facility is located here – the Scheibenholz Racecourse, opened in 1863 and a premier venue in the racing season.

Prior to 1990, Leipzig's waterways suffered from severe pollution by industrial waste but in recent years many species of fish have returned. But the rivers, canals, ponds and lakes of Leipzig are not only attractive for anglers but also for those who enjoy a boat trip. On Karl Heine Canal you can take a fascinating boat trip through the brick architecture of the former industrial centre Plagwitz. And if you prefer cycling, you can take a good cycle track along the canal banks connecting the city centre and Grünau, Leipzig's "satellite" suburb with the Lake Kulkwitz, one of the city's most popular recreation areas with beaches and camping site. 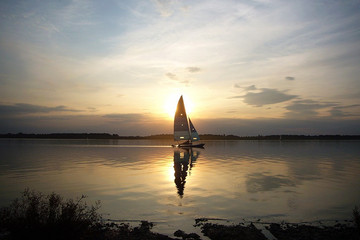 Leipzig is an ideal place for walks and cycle tours with the whole family. In the southern part of the Auenwald floodplain forest there is a Game Park, in which European forest animals can be seen in generous enclosures. In addition, a track leads to the new recreational area at Lake Cospuden with recreation facilities including a landscape park, a natural adventure stretch, bathing beaches, restaurants, cafés and a lakeside theatre.

A new highlight on the city's southern periphery is BELANTIS Theme Park, the only one of its kind in eastern Germany. The park covers an area of 25 hectares including 60,000 square metres of water and a four kilometre circular walk which takes visitors on a journey through time. 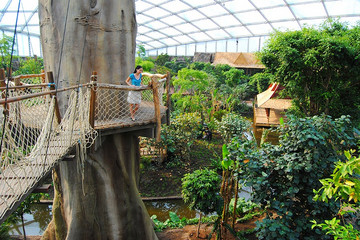 Other green oases in Leipzig include the Botanical Gardens with a butterfly house with about 200 different species, and Leipzig Zoo. Only a few minutes from the city centre, Leipzig Zoo is transforming into a "Zoo of the Future": keeping animals in near-natural environments while providing ways for its visitors to experience the animals' natural behaviour with all senses are key motives in the Zoo's active change-over. The first successful steps have already been taken by building a lion's savannah, a tiger taiga, an African savannah and the world's largest zoo facility for anthropoids.

But you can also explore the region's geology. In Leipzig-Stötteritz, near the Monument to the Battle of the Nations, there is a pyramid of glacier stones, five metres tall. This monument combines aspects of classic architecture, construction and economic history likewise.

As a city of fair, Leipzig also has a long tradition and great success in sports. In addition to soccer and its two leading clubs, the RB Leipzig (RasenBallsport Leipzig e. V.) and the 1. FC Lokomotive Leipzig, swimming, cycling, athletic, volleyball, handball and hockey are the most favored sports. Every Year, several national and international sport competitions are part of the city's specific attractions. Sport highlights such as meeting "L.E.-Athletics" in february, the Ladies Foil Fencing single worldcup in may and the Freestyle wrestling German Grand Prix in july, for instance, have become important dates in top athletes' diaries.

Leipzig's Red Bull Arena is, and always has been a major attraction. With 100,000 seats, the stadium was opened in 1956 and was the largest stadium in Germany. To adapt the stadium to modern requirements and to stage international competitions, a modern arena seating 45,000 was "planted" into the stadium's massive belly. It was one of the venues for the Confederations-Cup 2005 and the Soccer World Championship 2006.