Take a stroll, shop and linger …

From A for antiquarian bookstore to Z for Zoo shop, Leipzig is the perfect location for a day's stroll through stores and boutiques. A large number of prestigious specialist retailers are located right in the city centre, suitably accommodated in the large Passagen arcades. A shopping trip could start under the arcades of the Old Town Hall, where Leipzig souvenirs and literature on the city are available. 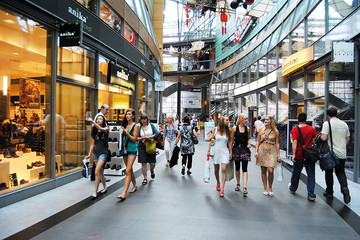 Mädler Passage, which leads on to Königshaus- und Messehofpassage, has a selection of luxury shops and boutiques to warm any shopper's heart. The shopping arcades in Specks Hof, the former trade-fair palace between Reichsstrasse and St Nicholas' Church square, and those in Barthels Hof have been extensively refurbished. There are new shopping arcades in Städtisches Kaufhaus, Strohsack-Passage and in Petersbogen.

With its Hauptbahnhof-Promenaden, Leipzig's Central Station is one of the most modern shopping and service centres in Germany. Several well-known department stores have opened both in the city centre and in newly built shopping malls. But the pedestrian-oriented city centre remains the favourite destination for an interesting shopping trip for many Leipzig residents and visitors.

Leipzig's Fresh Foods Markets where agricultural produce from the region is sold by farmers and traders are most popular among the citizens and visitors. There is a market near Leipzig Central Stadium on Saturdays, where you can find almost anything your heart desires. On every first weekend of the month, an antique and flea market is held on Saturdays at the Central Station (platform 24) or in the city centre, and on Sundays on the grounds of Leipzig's Old Exhibition Centre (Hall 13). Every last weekend in the month, antique collectors are in for a treat at the antique and second-hand market at the agra exhibition centre in Leipzig-Markkleeberg. 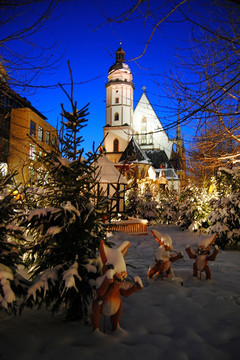 Country markets like the flower and ceramics market in the Market Square in May are already an established tradition, as are the Market Days in September and the Leipzig Book Market in mid-September. A special attraction every August is the Barkers' Competition, for which peddlers from all over Germany come to Leipzig. This noisy competition is held in front of the Monument to the Battle of the Nations Monument, and apart from market entertainment it also offers an opportunity for making many a bargain. Three times a year, the traditional Leipzig Fun Fair opens its gates to visitors (April, August, and October) on Cottaweg, with sales stands, lottery stalls and a true fairground atmosphere.

In the period before Christmas, the Market Square and its neighbouring areas are decked out for the season – a Fairy-Tale Forest and the world's largest free-standing advent calendar are among the attractions for young and old at the popular Leipzig Christmas Market.