Rising numbers of inhabitants determine the development of Leipzig.© City of Leipzig

The general situation in Leipzig has fundamentally changed since the first Urban Development Concept in 2009, especially regarding socio-demographic and economic aspects. A phase of strong growth began in 2012 with the population increasing by over 10,000 annually. This growth is accounted for by the high quality of life in Leipzig and the above-average development of employment.

Another significant increase in population is predicted between now and 2030. Given forecasting uncertainties, INSEK Leipzig 2030 focuses on an urban structure which is adaptable in response to changing development trends.

Leipzig is growing mainly due to inward migration, and also because of the positive birth rate since 2014 (which has increased by 25 percent since 2009). Interestingly, the strong demographic development was preceded by the development of Leipzig's economy. This is partly evidenced by the annual increase in employment since 2006 of around 3 percent. As a result, unemployment has more than halved while the socioeconomic situation of Leipzig's residents has improved across the board.

These dynamic changes have brought about changes to population development, the age structure and the socioeconomic situation almost everywhere in the city, albeit to varying degrees. In some areas, the population grew by over 40 to 50 percent between 2009 and 2016, while in others the population stabilized. There are also districts where more attention needs to be paid to social development.

Despite major development steps, Leipzig still has a long way to go to catch up with other cities, such as regarding its economic muscle and trade tax revenues as well as levels of school dropouts and income poverty.

According to the population forecast of 2016, by 2030 Leipzig could have a population of as many as 720,000. This would require 78,000 additional homes, 70 more schools and 13,000 new preschool places. On the following pages, data are presented on the basic parameters - the basis of the INSEK Integrated Urban Development Concept for Leipzig 2030. 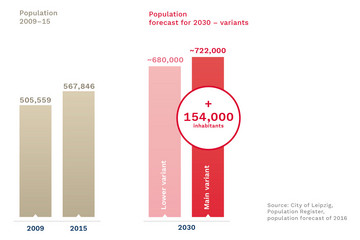 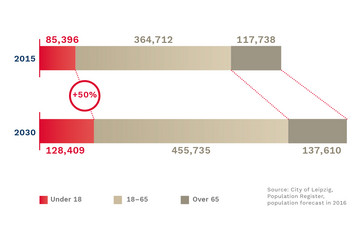 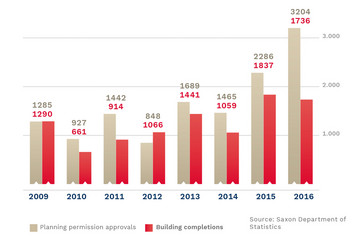 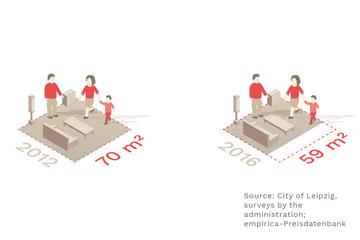 In return for a monthly rent of €360 excluding heating costs, new tenants received on average of 70 squarmeters in 2012 and 59 squaremeters in 2016. The asking rent (for new lettings) rose by 21 percent - faster than the average monthly household income. 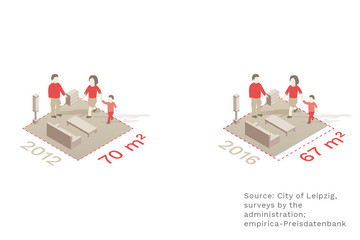 The monthly rent excluding heating costs for existing tenancies rose by about 5 percent. 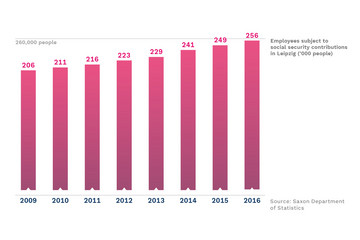 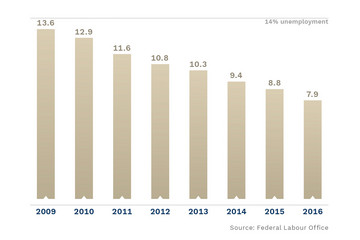 Thanks to rising employment, the unemployment rate decreased from 13,6 percent in 2009 to 7,9 percent in 2016 by almos 6 pecerntage potins, a decrease of 42 percent. 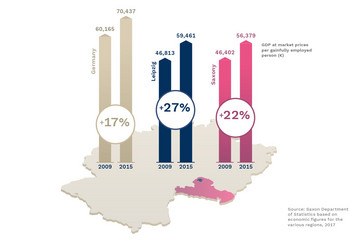 Gross domestic product (GDP) per person in employment 2009 and 2016 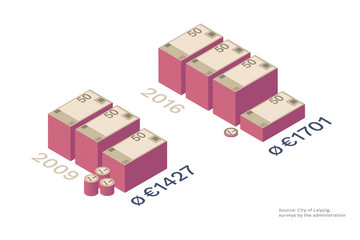 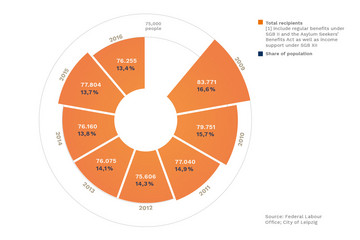 Overall, the number and share of benefit recipients have perceptibly decreased since 2009, mainly because of the sharp decline in SGB II recipients by around 12,500 to 66,100. By contrast, the number of recipients covered by SGB XII and the Asylum Seekers' Benefits Actrose to 6,100 and 4,100 respectively. 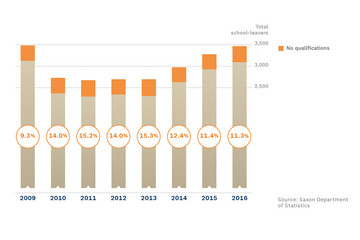 School-leavers with no qualifications 2009-2016

The share of schooll-leavers with no qualifications dropped to almost 11 percent as the population rose from 2009 to 2016. Leipzig is thus significantly above the average of 8.5 percent in Saxony. 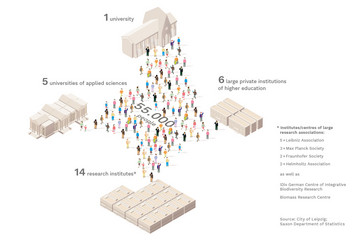 Higher education and research in Leipzig 2015/2016

More than 55,000 people (almost a tenth of the population) teach, learn, conduct research or work in Leipzig's higher education and research sector. 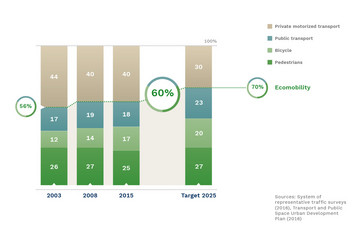 Ecomobility is still about 60 percent and thus 10 below the target. Cycling has reached a high proportion in comparison with other cities with significantly more journeys made by bicycle than in 2008. When it comes to Ecomobility, walking is the most important factor (2015 with 25 percent of all routes) followed by local public transport and bicycle use (2015 with 18 and 17 percent). 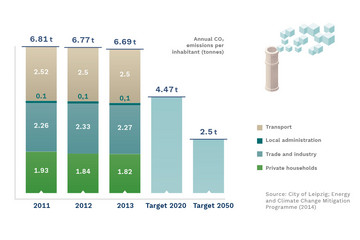 CO2 emissions per capita fell slightly from 2011 (6,81 tons) to 2013 (6,69 tons) in the urban area of Leipzig, partly because of the positive effects of the densification of the city. A significant 33 percent reduction is needed if the target of 4,47 tons for 2020 is to be achieved. 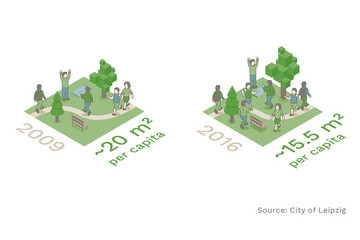 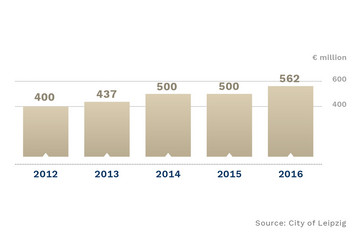 The increase since 2012 is mainly due to rising trade tax revenue (+98 million Euro) and the municipal share of income tax (+50 million Euro).

Taxes and duties - sources of revenue retained by the City of Leipzig - make up about 37 percent of municipal income. 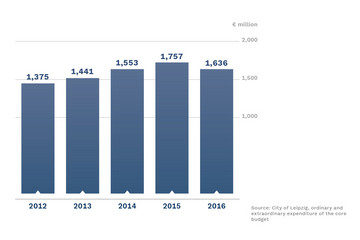 Expenditure has increased considerably from 2012 with EUR 1.375 million to EUR 1.636 million in 2016. The largest item sin the budget apart from wage costs are childcare, housing, social services (excluding asylumseekers and accommodation) and culture. The priorities of the investment programme are childcare and schools as well as transport and mobility. 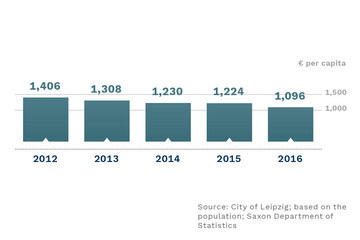 The level of debt was reduced between 2012 and 2016 by more than €100 million to around 626 million Euro. As a result, per capita debt also fell by about 22 percent. The City of Leipzig is aiming for complete debt relief by 2038.